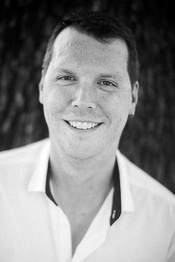 Ryan Williams is in his twelfth year as Director of the Byrd High School Drama Department.

Mr. Williams is from Shreveport and attended Byrd High School.  He received his BA in Theatre/Speech from Centenary College of Louisiana in 1999.  Upon graduating from Centenary, he moved to New York City to complete an internship in theatre administration at The Juilliard School on the campus of Lincoln Center.  He moved back to Shreveport and began teaching.  In addition to Byrd, he has taught at Caddo Middle Magnet, Loyola College Prep, and Woodlawn High School.

Ryan received his Masters Degree in Education from Louisiana Tech University in 2006.  He was also named Caddo Parish High School Teacher of the Year in 2010.

In addition to teaching drama and film classes at Byrd, he also directs the majority of the plays and musicals Byrd Drama produces.  Please check out the "Galleries" section of the website to see photos of productions he has directed at Byrd.

Mr. Williams has also directed many plays and musicals in the Shreveport area, including
You're a Good Man, Charlie Brown, Clue: The Musical, Schoolhouse Rock Live!, Singin' in the Rain, Guys and Dolls, Kiss Me, Kate, The Secret Garden, and Pangaea.

As an actor Mr. Williams has appeared in many local productions.  Some of his favorite roles include Alex More in Buyer & Cellar (RCRT), Dan in Next to Normal (StageCenter), Mike in As Bees in Honey Drown (MLP), Jafar in Aladdin (PPP), Mordred in Camelot (PAC), Albert Einstein in Picasso at the Lapin Agile (MLP), Erik in Grand Hotel (MLP), and Eddie Lyons in Blood Brothers (MLP) a performance which garnered him the Times Drama Award as Best Actor in a Musical.